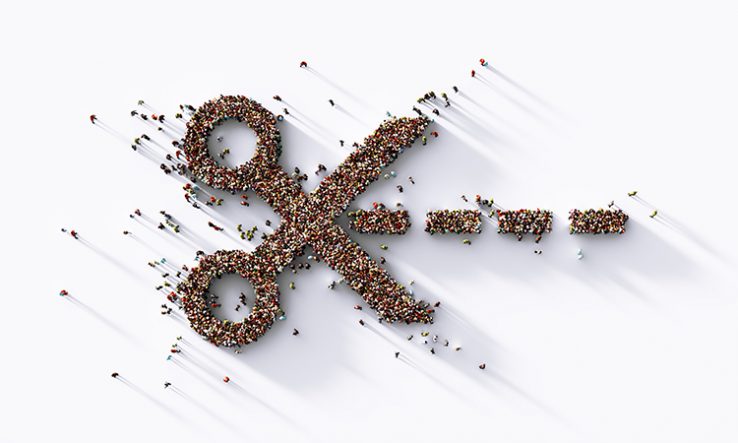 Steep cuts in funding for UK international development research extend beyond the country’s national funding body, with ten other organisations seeing their budgets slashed as a result of the government’s decision to reduce spending on international aid.

Last week it was revealed that the £125 million budget for 2021-22 that UK Research and Innovation had been given for research funded by Official Development Assistance was 70 per cent less than the funder’s ODA budget in 2020-21, at £422m.

The unprecedented cuts to UKRI’s ODA budget mean the funder is being forced to cut off ongoing research projects funded by programmes including the Global Challenges Research Fund (GCRF) and the Newton Fund.

But while UKRI is responsible for the lion’s share of funding from these two funds, there are 10 more funding bodies that hand out grants from those funds to universities and researchers, all of which are also facing major cuts.

The total reduction in ODA funding for international development research between 2020-21 and 2021-22 now sits above £399m, according to analysis.

Research Professional News revealed last week that English universities would not receive around £60m in quality-related funding for international development research, which had been awarded in previous years by Research England as part of GCRF. Research England told universities they would not be receiving any QR GCRF in 2021-22.

In 2020-21, universities in Scotland, Wales and Northern Ireland received over £17m in block grants for spending on development research.

But one senior source at a Welsh university told Research Professional News that while the sector may have had reasons to be hopeful of the continuation of these grants beyond 2020-21, there were never any guarantees or commitments as such that those funds would continue.

The Royal Society’s ODA budget supports grant schemes for early career researchers in Africa as well as fellowships and international collaboration awards. The organisation informed Research Professional News that its ODA allocation from BEIS has fallen 68 per cent from £25m in 2020-21 to £8m in 2021-22, and that there would be no ODA-funded grants awarded in the coming year.

“We are extremely disappointed by these deep cuts to the ODA-funded R&D budget,” said Richard Catlow, foreign secretary of the Royal Society, adding “we will no longer be able to fund an emerging generation of leading African scientists”.

The Academy of Medical Sciences runs networking awards through the GCRF and fellowships through the Newton Fund. The organisation told Research Professional News it has informed its current grantholders that their awards are safe for the coming financial year but that future rounds are in jeopardy.

“The Academy of Medical Sciences has been asked to cease all calls for new ODA activity, and to prioritise existing activity,” it said.

“The Academy places great importance upon its international activities and acknowledges the uncertain environment in which researchers are operating. We remain committed to ensuring that our award holders are provided with the support that they need.”

The Royal Academy of Engineering delivers funding schemes through both the GCRF and the Newton Fund and told Research Professional News on 22 March that, having heard from BEIS, it is still working through the impact of the reduction to ODA on its grant programmes.

Andrew Clark, director of programmes at the Royal Academy of Engineering, said on 12 March he was “particularly concerned” about the impact the cuts would have on international partnerships.

“We will update grant holders and others who benefit from our GCRF and Newton Fund programmes once we have confirmations from government that they approve our approach on the specific implications of the funding cuts,” Clark added.

The British Academy, which supports development projects in the humanities and social sciences through the GCRF and the Newton Fund, told Research Professional News that their ODA funding had been cut by over 70 per cent and they would not be able to make any new awards in 2021-22.

On 18 March, the academy’s foreign secretary and vice-president Simon Goldhill said he was dismayed at the scale of the cuts and the impact they would have, but that “none of our existing award holders will have their research funding reduced or terminated”.

The British Council, which funds partnerships between researchers in the UK and developing countries under the Newton Fund, told Research Professional News that its ODA allocation had fallen 66 per cent, from £12m in 2020-21 to £4m in 2021-22.

A British Council spokesperson said they did not plan to run any calls for Newton Fund grants in 2021, and that they are “working closely with grant recipients and national and global stakeholders following the announcement of our portfolio reduction”.

Through its international partnership programme, the UK Space Agency’s funds development projects across Africa, Asia-Pacific and Latin America as part of the GCRF. In August 2020, the agency announced £3.4m in funding for 10 projects, none of which will now continue to be funded beyond their initial phase.

The UK Space Agency will also not be offering any new funding through its international partnership programme in 2021-22.

As part of the Newton Fund, the Met Office runs a programme for global partnerships between UK scientists and researchers in developing countries for strengthening weather and climate resilience of vulnerable communities.

A Met Office spokesperson said the programme “has received an allocation for 2021-22 which is significantly reduced from last year’s budget” but that “it is not unexpected in light of wider ODA funding cuts”.