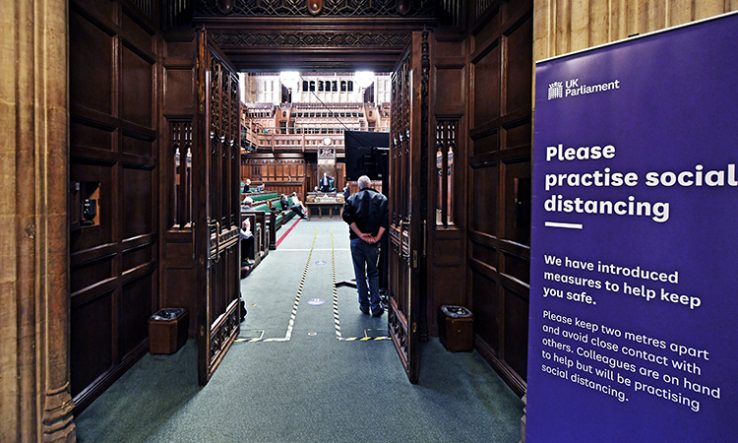 Scrutiny of government has been weak, but researchers can help it improve, says Chris Tyler

By 25 March this year, Covid-19 had become a major problem in the UK. Public Health England had stopped contact tracing because there were too many cases to trace, NHS England had suspended all non-urgent operations to keep hospitals clear for Covid patients, and the government had imposed a lockdown.

Yet despite all this, parliament went into recess that day and all parliamentary scrutiny of government decisions ceased for nearly a month.

Other countries took an alternative path. Although New Zealand’s parliament went into recess at about the same time, it set up a special select committee, chaired by the leader of the opposition, to meet remotely throughout recess. In the UK, it did not help that the Labour Party was in the final stages of a leadership election. Keir Starmer was only elected as leader on 4 April.

It would be nice to report that when parliament returned in April, it did so with gusto. But parliamentarians have only recently discovered a zeal for scrutiny, as it has become increasingly apparent that the government is feeling its way through this crisis without an obvious, let alone communicated, strategy.

The crux of the problem is that the government, crudely speaking, faced two options earlier this year. It could focus on saving lives, like Germany, or saving the economy, like Sweden. Lacking a clear strategy, it failed to do either.

Second, via scrutiny and debate, parliamentary tweaks to the government’s direction of travel add democratic legitimacy to its decisions. And third, the government’s repeated assertions that it relies on “the science”, could have been nipped in the bud, both by parliament’s science advisers telling attentive politicians that this contention was nonsensical, and by providing an independent and transparent assessment of the latest natural and social scientific thinking on Covid-19.

I want to focus on two aspects of the role of science advice in parliament. The first is an assessment of the internal science advisory capacity of the UK parliament and how it needs to change. The second reflects on the role that the research community should be playing in this crisis.

The UK is lucky that its parliament has a robust, expert, experienced and distributed science advisory system. At the heart of this, working for both the Commons and the Lords, is the Parliamentary Office of Science and Technology, which I had the privilege of running from 2012-17. Post is a proactive source of science advice for the whole of parliament that specialises in telling politicians things they need to know but never thought to ask.

Parliament has two other important sources of science advice. One is the libraries. The House of Commons Library in particular is host to several people with scientific backgrounds, who respond to requests for advice on a range of scientific and technical issues. The other is the select committees, each with its own specialist advisers comprising internal subject specialists and external experts, usually academics.

The crucial thing to remember about all this advisory capacity is that it is shaped by the structures that it advises. In our parliament, that means that, primarily, it is set up to help politicians debate and select committees to scrutinise government departments. Library staff do the former, select committee staff the latter, and Post staff do both.

The library’s strength is that it responds quickly to politicians’ requests for information. But this is also its weakness: it does not proactively summarise research evidence and feed it to politicians—it doesn’t have the time, and so hasn’t fostered the required expertise.

As a result, unless politicians are diligent about doing their research before debates—reading, among other things, publications from Post—they just get the information they ask for. This does not always lead to the most informed of debates, and certainly not the most evidence-based.

The strength of the committee staff is that they know their subject areas well and understand how select committees work. They are also assisted by external experts who, in theory and usually in practice, have a good handle on the underlying evidence relevant to each inquiry.

In the case of Covid-19, this has led to patchy evidence in debates and narrow scrutiny of policy. There is a Covid-19 committee in the House of Lords, but with the best will in the world its structures and personnel are too slow-moving and lack democratic accountability. This is not what the House of Lords is good at.

The House of Commons urgently needs a Covid-19 committee so proper cross-departmental scrutiny of government policy can be fast-moving and politically relevant enough to matter. That committee should have staff that can navigate the relevant evidence, and Post should be put on a 24/7 retainer to provide up-to-date summaries of the research evidence as it is published.

In short, parliament needs to make the most of its own source of science advice, so that politicians are less reliant on politically sanctioned comment from government science advisers and delayed publication of minutes from advisory bodies such as Sage. As a platform for scrutiny, the current situation is wholly inadequate: it undermines the role of parliament in enhancing government decision-making and it damages democratic accountability.

My second point is that the research community needs to channel its energies much more towards parliament. The government is set up to pull in the expertise it needs and, despite a few wrinkles, has generally done a good job. Sage and its supporting committees are well structured and have good people on them.

Parliament, in part for the reasons I’ve laid out above, is less adept at pulling in evidence. However, it is better than it has ever been. One initiative I am involved in, led by Post and with funding from the Economic and Social Research Council, is the establishment of a Knowledge Exchange Unit tasked with building bridges between the academic community and parliament. Alongside training programmes and fellowship schemes, it has been working to build up parliament’s access to Covid-19 expertise.

If you have something to say about Covid-19, the Knowledge Exchange Unit will point you in the right direction. But in terms of how to engage, here are few evidence-based pointers.

The first is that the most important determinant of whether parliamentarians will listen to you is your credibility. Charities, think tanks and lobbying groups are expert at building up credibility and work to do so over many years. They build relationships with individual parliamentarians and learn the systems and processes that make parliament tick.

Academics need to do the same thing. Treat politicians as people and understand their priorities and the constraints in which they operate. Give them what they need, not just what you think they need to make the argument you want them to make. This leads to two more points.

First, summarise research. Evidence syntheses are more useful to politicians than summaries of individual papers. Parliamentarians need to understand the totality of the information—it reduces the temptation to cherry-pick evidence, which academics should absolutely not be enabling. Which brings me to the last point, that academics should aim to be, in Roger Pielke Jr’s influential phrase, honest brokers of policy alternatives. Don’t be a policy advocate and don’t under any circumstances advocate by stealth.

This brings us back to where we started. The challenge of making policy is that there will always be winners and losers—there are no unequivocally right answers or silver bullets. This is challenging at the best of times, but in an emergency like a global pandemic the choices are agonising, the uncertainties painful and the repercussions for particular policy choices unforeseeable.

This government clearly does not have a strategy for dealing with the pandemic. More parliamentary scrutiny would help, and researchers have a role in ensuring it does.

Chris Tyler is director of research and policy in the Department of Science, Technology, Engineering and Public Policy, University College London