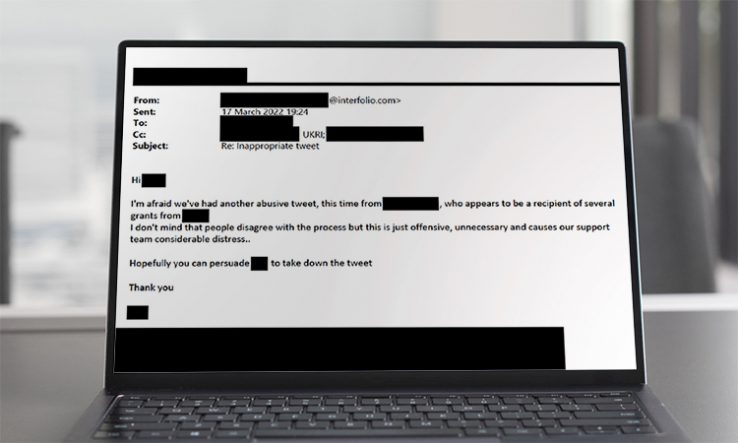 UK Research and Innovation has finally disclosed some of its email correspondence with Researchfish, in which the national research funder appears to side with the private impact-tracking service against academics tweeting critically about the service.

The emails reveal that before their approach blew up on social media, which led both the funder and the service to apologise, at least one person at UKRI thought that Researchfish tweets “set the correct tone” and that they, too, wanted tweets critical of the service taken down.

“This was an explicitly sanctioned and encouraged effort from UKRI, and one I hope they take significant lessons from,” said Michael Veale, an associate professor in digital rights and regulation at University College London, whose FOI request UKRI replied to yesterday.

Research Professional News has approached Researchfish and its parent company Interfolio for comment, and UKRI declined to comment specifically on the FOI release and Veale’s comments.

Researchfish, which is used by many leading UK funders to track researchers’ work, was accused of bullying and intimidation earlier this year after it said it had reported academics to their funders for posting critical Twitter posts about the service.

It later emerged that UKRI had encouraged Researchfish staff to flag “abusive, threatening and offensive tweets” to it, and the funder then apologised for this approach.

In March, amid the uproar on social media, Veale filed an FOI request requesting UKRI to provide “all correspondence between Researchfish and UKRI from the last five years relating to Researchfish reporting on behaviour of researchers to UKRI based on their social media statements about Researchfish”.

The funder said in April it could not disclose such correspondence because the cost of doing so would be too high given that “an initial search of correspondence between UKRI and Researchfish in relation to Twitter and social media over the last five years returned over 200,000 results”.

Veale then narrowed down the request to focus only on emails since the start of 2019 and those featuring the Twitter accounts of several academics who were involved in the exchanges with Researchfish.

The emails reveal what appear to be short and fairly informal exchanges between people with email addresses at UKRI and Researchfish, or Interfolio, in which someone at the funder describes Researchfish’s replies to academics as setting the “correct tone”.

A person with a UKRI email address describes removal of one critical tweet as getting the “result we needed” and it apologises to Researchfish for “not stepping in” when they were out of office for a day.

In one email, UKRI also shares what appears to be a long list of awards one reported academic holds, and it considers what “disciplinary options” it might have against the academic.

Researchfish itself describes academics’ tweets as being “offensive” and “extremely inappropriate” while it describes one of its tweets to an academic as a “gentle reply” sent in the hope the academic would remove their critical tweet. They also talk about their staff who see critical tweets and then “get distressed”.

They further give UKRI “the opportunity as [redacted] funder to acknowledge with them that this is not the expected behaviour of recipients of UKRI/government funding”.

In one message the UKRI emailer says said Researchfish’s response “sets the correct tone as an immediate response” while another message from someone at the funder says “it seems that your reply did the job and the tweet has been removed…it looks like we got the result we needed”.

Commenting on the release, Veale said: “It’s one thing for a company to have an ill-considered PR policy relating to criticism of its brand. It’s quite another for a public body to make that bad policy their own, egging them on and providing unsolicited grant data to those ends.

“This was clearly not just a trigger-happy social media team; this was an explicitly sanctioned and encouraged effort from UKRI, and one I hope they take significant lessons from.

“If there is frustration with a research process, perhaps it’s not a sign of abusive behaviour, but academics annoyed with being insufficiently listened to.

“I hope the government’s forthcoming review of research bureaucracy is more successful at improving Researchfish’s practices than UKRI have been.”

While UKRI declined to comment on the FOI release, it pointed to its previous statement from 19 April on the approach to the matter.

That statement said: “We have stopped this approach with immediate effect and recognise it was the wrong thing to do. We understand that this has raised questions around personal data. We take data protection very seriously. Our assessment of the data protection considerations is ongoing and is expected to be concluded shortly.

“We have discussed with Researchfish that any tweets of concern to them can be dealt with through the mechanisms provided by the platform, such as the Twitter reporting function.

“We apologise for our approach and actions on this issue, and the concern this has caused. We believe that all staff have the right to work free from abuse, bullying or threat. We recognise the right of people to criticise an organisation or system without fear of reprisal.”